Today's Friday Five from the Revgalblogpals is all about randomness.

1. What is one of the best things that happened to you this week?
I thought you'd never ask.  Last SATURDAY, my family and I went to Portland's first ever COMIC-CON.  Feel free to read no further, if you are too cool for comic-con...
Ok, fellow geeks.  Here's what happened.  We did not get to see the special guests (Richard Hatch is best known for his role as Apollo...), make it for the workshops (example: Happy Birthday Star Trek!), or hang out at the booths (example: those guys who dress up like Storm Troopers and do faux military exercises).  We, did, however get there in time for the after party costume contest where I got to see a couple of guys dressed like ghost busters who told me that they are always getting beaten up in bars on Halloween, talked to girl dressed up like Spock about how many stitches across the fourth Doctor's scarf is, and met another woman dressed as Joker's girlfriend.  Who knew Joker had a girlfriend?  Yeah, me neither.

2. If you were in a Ms/Miss/Mr. Pageant, what would talent be?
Speaking of comic-con...  Wait a minute.
If you are too cool for comic-con, you probably shouldn't read this one either.   One of these questions soon will be for you cool people, I promise.
Anyway, speaking of comic-con, the adorable teenage girls who dressed as the Doctor - and there were a lot of them - all wanted my photo and one of them called me Mrs. TARDIS Lady.  If I were in a pageant, my talent would definitely be to be bigger on the inside. 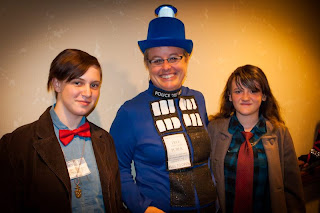 3. You were just given a YACHT!!! What would you name it and why?
When I was a child on Madeline Island...
(See, cool.  As promised.)
...I used to love the boat names that were puns - Aboat Time, or Aquaholic.
If I had to give a yacht a pun name it would be All Docked Out, because riding on boats really makes me kind of queasy, so my yacht would have to spend a lot of time in the marina.

4. If you were to perform in a circus, what would you do?
Tight rope. Just because it so cool and so something that I could never do in my real life for a variety of reasons like I have no balance and heights (such as climbing on a kitchen chair to get something off the top of the fridge) make my palms sweaty.
5. What do you have in your bag/wallet/backpack that best describes your personality.
In addition to keys to my house, my church and my bff's house, my key chain also holds a flashlight, a long hang-it-around-your-neck thingy with orange fish on it and a little fish I got free in the mail with some bad theology printed on the back. I used to lose my keys all the time, but I don't anymore.
I carry around more than I used to, that's for sure.  But this time of life also has some benefits.  Was lost but now I'm found, you know?
Posted by Jennifer G Brownell at 2:18 PM

...that's where I probably am right now anyway